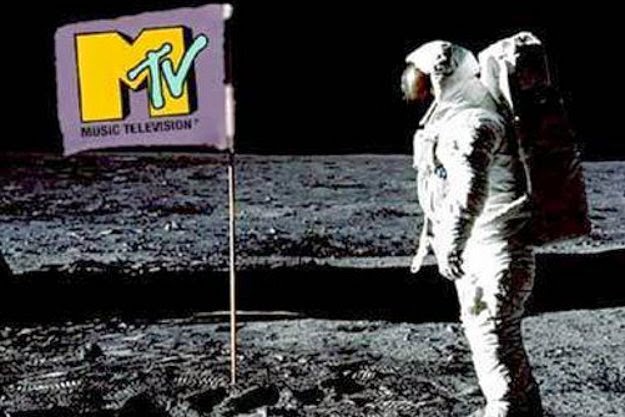 Hey, remember the 80's? I barely do and I was there. Truth is, the 80's are a little foggy for me now, but such were the times. I do remember the revolutionary and nearly immediate takeover of cable TV by MTV Music Television in '81. This was back when they played music, all day and night, non-stop. It seemed that in very short order, we had gone from what we now call Classic Rock into Punk and New Wave, and now we've got this Flock Of Haircuts or something, with this guy who looks like Hawkman singing about Iran and how far away it was. What the hell was that all about, anyway?

What it all meant was that this Second British Invasion represented a huge shift in the Pop music climate. Sure, many of the great Classic Rock bands were from England, as well as the Punks, and there were plenty of American Rock bands making their mark on the charts all that time too. But by the mid-80's, it was the British bands that ruled the day. Despite all the Reagan Era, Rambo-esque, USA rah- rah that was going on at the time, if it was a Pop hit, it was probably British.

More often than not, I enjoy tribute albums. I really do, and it doesn't take too much for me to be completely satisfied with one. If the artist or genre being feted is someone or something that I can appreciate, the recorded results sound like some heart and positive energy and hard work went into it, and the album's concept makes sense, then it will probably be a good album. Usually the tribute albums that don't work sound as though they are under-rehearsed, ill-planned, or the project is little more than a forced effort in marketing and didn't really mean anything to anyone involved with it. 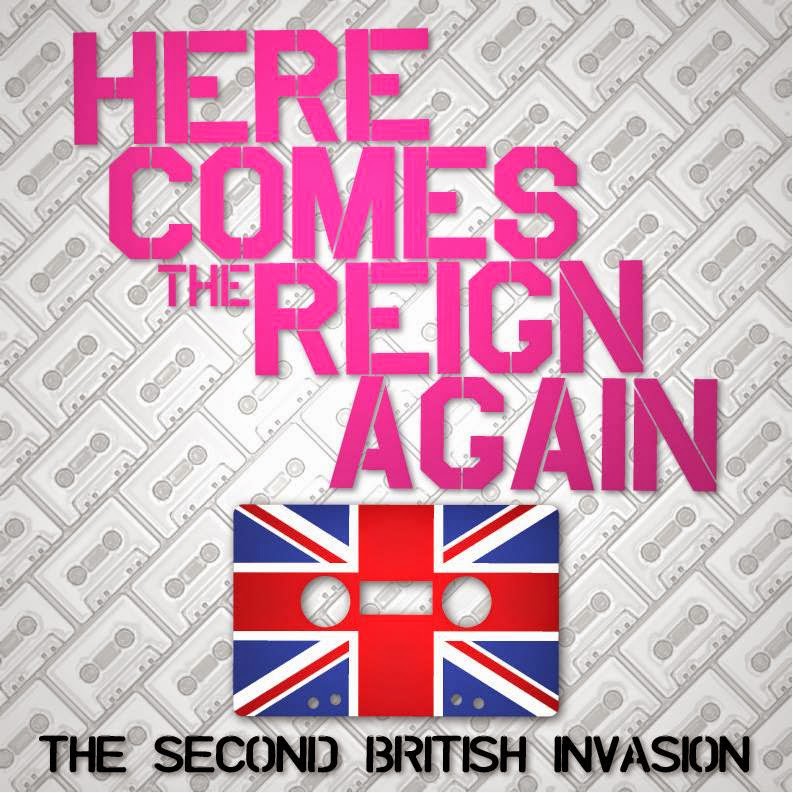 Fortunately, none of that negative stuff is the case with today's subject at hand, "Here Comes The Reign Again: The Second British Invasion". Like its 2013 predecessor, "Drink A Toast To Innocence: A Tribute To Lite Rock", this album is clearly a labor of love, which album producer Andrew Curry was able to impart to all of the participants, so 3 cheers to everyone involved with this project!

One distinguishing characteristic of 80's Pop songs was that strong production techniques shoved their way to the forefront. In some cases, producers like Hugh Padgham and Steve Lillywhite became marquee names themselves, as much or more than the musicians. I spoke with a songwriter last year who told me that his 1986 album "was far more (the producer's) record than mine". The dominant presence of typical 80's production work leaves anyone who is covering an 80's song with the options of doing their version of both the song and the production, or separating the two and simply playing the song as they would do it, had they written it themselves. So, with all that said, let's get to the music!

Our winner in the former category is The Corner Laughers, and their stellar rendition of "Our House" by Madness. This track was an early favorite during my first listen to the album, so I was glad to see that the band produced a video for the song, which cleverly replicates the look of a typical 80's MTV video. The production values of the Madness recording are there too, but you get this band's take on them as well, so bonus points for originality. The Corner Laughers also got my vote as the band whose album of original material I would buy unheard, based solely on this terrific cover version. Enjoy!


Regarding those who were able to skillfully recreate the production values of the original, I have to salute Bleu for his faultless rendition of Simple Minds' classic from "The Breakfast Club", "Don't You Forget About Me". Secret Friend also scored major production points for their take on "West End Girls" by Pet Shop Boys, which, to my ears, is also one of the best sounding tracks on an album that's chock-full of great audio. Some phat low end on this one.


I'm finding it difficult to choose favorites from the rest of the album, which is an excellent problem to have, as there's so much really good work here. To me, good cover versions are supposed to sound like the musician doing the cover, while maintaining respect for the original song, so props go to Chris Collingwood of Fountains Of Wayne for his take of "Life In A Northern Town" by Dream Academy, and Cliff Hillis for the horns on Nik Kershaw's "Wouldn't It Be Good". An American Underdog did a great job with Howard Jones' "Things Can Only Get Better", and Linus Of Hollywood also scores highly with "Everytime You Go Away", which Daryl Hall wrote, but it wasn't a hit until Paul Young covered it. The Davenports have themselves a infectious, hand clapping, Power Pop rave up with the Wham hit, "Freedom", while People On Vacation do some rightful justice to Bananarama's "Cruel Summer".

Now, for the most original renditions. I definitely enjoyed the recasting of another Howard Jones song, "No One Is To Blame", as not only a lilting reggae tune, but also as a male/female duet by Eytan Mirsky and Alyson Greenfield. Nice work, you two!

Next up is Tracy Bonham's arresting performance of Eurythmics' "Sweet Dreams Are Made Of This". Bonham captures everything that was eerie and unsettling about the original and amplifies that with her sparse arrangement. Less is, indeed, more.


The one track on the album that's likely to raise an eyebrow or two is Graham Alexander's brave rewrite of "They Don't Know", the Tracey Ullman hit written by Kirsty MacColl. It's done as not only a stripped down ballad, but the point of view has been altered completely with just a subtle change of some key lyrics in the chorus. I know that some people will freak out and slam the door on it because it's so different from what they're used to hearing, but if you love the song that much, then, to be fair, I will advise another listen. The true merit of any song is often proven in the fiery furnace of reinvention, and I believe this song emerges from the heat not only unscarred, but stronger from the test. And so, I salute Graham Alexander for having the stones and the vision to take this great tune into compelling new territory. Work like this is the distinct mark of an artist.

Music is, first and foremost, entertainment, and therefore should be fun for the listener. This album is a front-to-back blast from your past! The bottom line is that "Here Comes The Reign Again" provides further conclusive proof that independent musicians and producers are far more capable of turning out tribute albums of superior quality that are fun, imaginative, musically engaging, and above all, genuine, than any major label has demonstrated for themselves in recent years. There's such an abundance of top notch work on this album that I couldn't discuss each of the 27 tracks here, lest this article turn into a small book. But know this; the album's producer has a fairly long list of great British 80's songs, some that are considered signature to the genre, that weren't chosen by anyone to cover for this album. Enough for, dare I say it, Volume 2?

We'll have to wait and see about that question, but first, this album needs to become as successful as it deserves to be. It's scheduled for release on Tuesday, September 30. If you didn't jump in during the successful Kickstarter campaign, you'll be able to get the album as a hard copy CD, a digital download, or both at iTunes, CD Baby, and Bandcamp. Direct links will be posted in this article, and on our Facebook page, the minute they become available. Do yourself a solid by supporting this fine album, and independent music in general.

UPDATE: Here's the pre-order link to the album at Bandcamp!
Posted by Bill Sammon at 8:21 AM

Thanks For Stopping By!

Love From Our Readers!

All written content is © Phillydog Media, 2014. Unauthorized use and/or duplication of feature article material without expressed written permission from the author of this blog is prohibited. However, quotes, excerpts and links may be used, provided that full and clear credit is given to both the author and the Kool Kovers blog, with appropriate and specific direction to the original content.

This blog project is intended solely for the entertainment of the reader and the author. The blog itself is not a store or business and sells no merchandise directly to consumers.

All featured audio content comes from my own personal music library, which I have purchased and collected over many years at incalculable expense. Video content is usually sourced from YouTube, who governs the availability of all media hosted by them.
All relevant copyrights pertaining to posted music and videos apply. I respect and support artists rights and will post streaming music and videos only. There are NO unauthorized downloads available on this blog and there never will be. Links to authorized websites where readers can purchase featured material will be posted whenever possible.

Technical note: Audio content is embedded in a streaming player that requires Adobe Flash to function. Any performance issues with the audio player are either a temporary external glitch with the server where the embedded file is stored, or the device on which you are viewing the blog does not support Adobe Flash.

If you are a musician or their representative and for some silly reason you don't want your music featured here, let me know and it'll be removed. Fair enough? I mean, you could just enjoy the free publicity and move on to bigger fish. I've posted it because I like your work! Can we at least be friends?

Bill Sammon
Hey, how ya doin'?