You Can't Sit Down 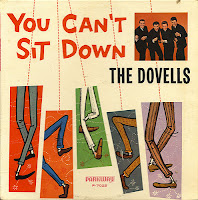 It's one thing to undertake a cover song project that's centered on a particular artist. Here's one that takes on the classic signature songs of the city of Philadelphia, as performed by a rotating core group of pedigreed Philly musicians with some local legends as guest stars.

The project is called In The Pocket and was conceived and is being led by David Uosikkinen, longtime drummer for The Hooters, a band that brought worldwide attention to the Philly music scene. Uosikkinen is recording, what he feels, are the essential songs of Philadelphia. The project will revisit songs recorded in Philly or those written and performed by Philadelphians.

Each song of “In the Pocket: Essential Songs of Philadelphia,” along with a video, can be downloaded for 99 cents at the In The Pocket website. A portion of In The Pocket’s proceeds will benefit Philadelphia’s Settlement Music School, whose alumni includes some of the city’s most beloved residents including Kevin and Michael Bacon, G. Love, Stanley Clarke and Kevin Eubanks. "There are a number of schools and a total of about 15,000 students" Uosikkinen said. "They’re great people, and they do really good things at Settlement. Since funding for the arts is being cut, we felt this was a worthy cause. When times are tough, the arts make life livable."

Producer/director Steve Acito of Blue Wire Media has been making a documentary video to go with each song. Shot in part at fellow Hooter Rob Hyman’s Elm Street Studios in suburban Philadelphia, the videos give a fascinating inside look into the complexities of recording. The video for one of the singles In The Pocket has done, "You Can’t Sit Down", features singer-guitarist Tommy Conwell on lead vocals.

"When it came time to record 'You Can’t Sit Down', I knew the only guy who could pull this off with total command was Tommy Conwell." Uosikkinen said. "He does not disappoint." Also featured on the video is longtime Philadelphia-based DJ and pop oldies historian Jerry Blavat, who has been rocking the airwaves and dance floors for over 50 years. The colorful, loquacious Blavat does his signature "boss with the hot sauce, geator with the heater" radio patter and provides a detailed background to "You Can’t Sit Down", taking it back to before the song even had lyrics. "We just called Jerry and he came down to the studio and said, 'what would you like me to do?'" Uosikkinen says. "He was so gracious. We said go, he did his thing and he was brilliant. It was a gas!"

Here's the video for "You Can't Sit Down". It runs about 9 minutes, but it goes by quickly. Enjoy!

Since respect is always due to the original artist, I found a bit of info on The Dovells, who had a hit with "You Can't Sit Down" way back in 1963. There's a complete band bio on their official website, so apparently they're still around in one form or another. Here's their original recording of "You Can't Sit Down". It's an instant dance party!


You can find this great tune and their other big smash, "The Bristol Stomp" on this fantastic label compilation, Cameo/Parkway: The Greatest Hits. It's essential early rock 'n roll, it's cheap and it's at Amazon. You can purchase the In The Pocket project songs direct from them at their website or at Amazon Mp3. As the Geator himself might say, "Hey yon teens! Don't be a square, get yer hep self there!"
Posted by Bill Sammon at 8:53 AM

Email ThisBlogThis!Share to TwitterShare to FacebookShare to Pinterest
Labels: In The Pocket, Jerry Blavat, The Dovells, The Hooters, Tommy Conwell

Thanks For Stopping By!

Love From Our Readers!

All written content is © Phillydog Media, 2014. Unauthorized use and/or duplication of feature article material without expressed written permission from the author of this blog is prohibited. However, quotes, excerpts and links may be used, provided that full and clear credit is given to both the author and the Kool Kovers blog, with appropriate and specific direction to the original content.

This blog project is intended solely for the entertainment of the reader and the author. The blog itself is not a store or business and sells no merchandise directly to consumers.

All featured audio content comes from my own personal music library, which I have purchased and collected over many years at incalculable expense. Video content is usually sourced from YouTube, who governs the availability of all media hosted by them.
All relevant copyrights pertaining to posted music and videos apply. I respect and support artists rights and will post streaming music and videos only. There are NO unauthorized downloads available on this blog and there never will be. Links to authorized websites where readers can purchase featured material will be posted whenever possible.

Technical note: Audio content is embedded in a streaming player that requires Adobe Flash to function. Any performance issues with the audio player are either a temporary external glitch with the server where the embedded file is stored, or the device on which you are viewing the blog does not support Adobe Flash.

If you are a musician or their representative and for some silly reason you don't want your music featured here, let me know and it'll be removed. Fair enough? I mean, you could just enjoy the free publicity and move on to bigger fish. I've posted it because I like your work! Can we at least be friends?

Bill Sammon
Hey, how ya doin'?